The initial impression of Quedlinburg at the train station is not overwhelming. But the image above is not at all representative of the town.

Quedlinburg is in the latter stages of a massive restoration begun in the 1980s. There are 1000 year old churches and the most original timber frame houses of any city or town in Europe. The centerpiece of town is the Schlossberg, the site of a women’s abbey founded in the 900s. It is dominated by the 900 year old church of St. Servatii.

The church is open for tours and includes a crypt and a church treasure that was lost for decades after WWII and discovered in Texas in the possession of the family of an American soldier. The building itself is a treasure. It has detailed carvings on the capitals and on a frieze that runs underneath the upper windows. The arcade is an unusual configuration with a pair of columns between rectangular piers.

There is a tower on the western edge of town, the Steinkierker Turm, that provides a nice overlook. When we first went up to it, we thought it was locked as there is a massive steel turnstyle like you sometimes find at sporting venues. However, it is unlocked by dropping a 1 euro coin in a slot. 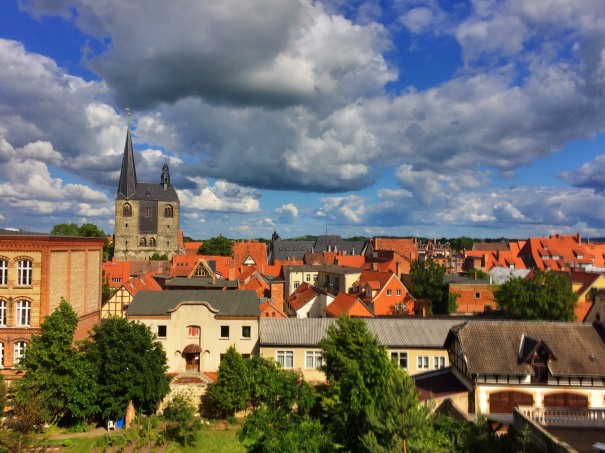 The church on the left is the Marktkirche St. Benedickt. As with many churches it was built in stages. The photo below show that the center of the nave and the center of the chancel are misaligned by a couple feet. This happens too often for me to believe it is merely the result of mis-measurement as some maintain. It took some clever stonework to make the two sections meet in any event. 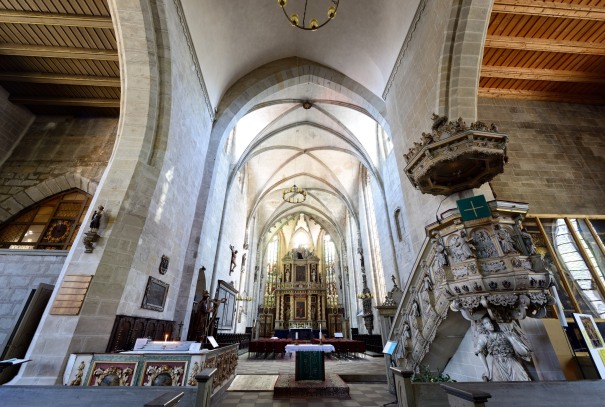 This statue of King David was once one of the columns supporting the organ loft.

The Rathaus is the main feature of the market square. Much of the building dates to the 14th century. The tower on the left was added in the 15th. Further renovation took place in the 17th and 19th centuries. 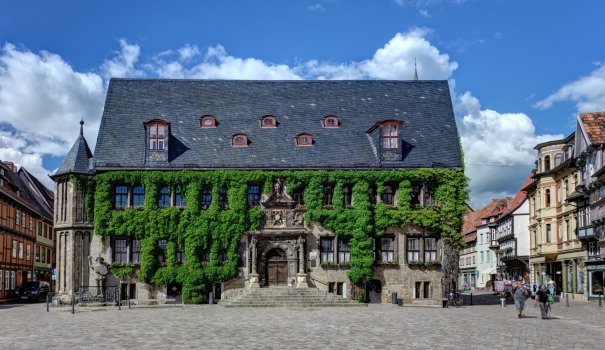 There are about 1400 timber frame houses in Quedlinburg, some of which date to the 1300s. Most have been beautifully restored. The ones below are in one of several plazas that dot the town. 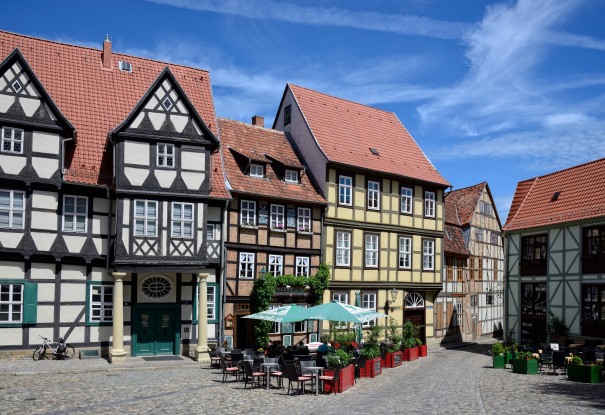 Many houses have inscription on the beam just above the ground floor. The two below say:

We met a man whose friend bought one of these houses in the 1980s for 40 East German Marks, just a couple Euro in today’s funds. It’s worth over a million now. There are still some houses available for restoration like the one below. You might not get quite the same deal though.