Every visit to Australia should include Ayers Rock. It stands 1000 feet above the plain in the dead center, or rather the Red Center, of Australia, and is roughly 1 mile by 2 miles in extent. It is so unique, that people just call it The Rock.

The Rock is impressive at any time, but just after sunset, it glows brilliantly. It’s not hard to get a top quality image.

There is a great walk around the base. It’s about 6 miles, but very flat, so in nice weather, i.e. not summer, almost anyone can tackle it. The variation in the rock formations are fascinating. There are actually a lot of trees and a couple of hidden ponds that add to the variety.

The real treat though is a climb to the top. The way is steep and not for the fainthearted, but if you can handle 20 minutes on a stairmaster, you should not have much difficulty. There are some folks who try to discourage climbers, but there is a written agreement between the aboriginal communities in the area and the Australian government permitting climbers. So, I had no qualms about doing it. The climb does get closed sometimes due to rain (infrequent) or wind (2 days out of the 3 I was there) and I think also heat (most of the time in summer). 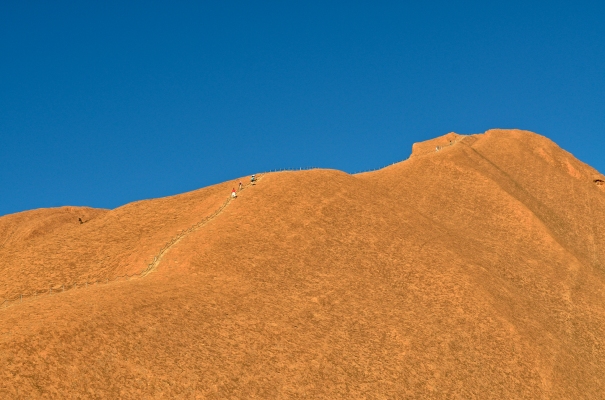 At the top of the chains, there is a call box, if you need help. There is no cell coverage in the area. This is a nice place to rest though, because you are about half way up and have another mile to go until you reach the center.

The top is much more rugged than the view from the ground might lead you to believe. Even once the steep part is done, there are numerous places where you need to scramble up short, steep sections.

The view from the top is amazing. You feel like you are in the middle of nowhere. You are likely to meet people up there from almost every corner of the world. Take some lunch and wander about, but stay away from the edge. The drop off is dramatic and there is nothing stopping you if you slip.

One last item. The formation in the distance is Kata Tjuta aka The Olgas. The highest point is 600 feet higher than the rock. You can’t climb there, but there are several nice hikes of varying lengths that meander amongst the peaks and give you a chance to enjoy the unusual landscape. It’s almost 20 miles away and worth a day all by itself. 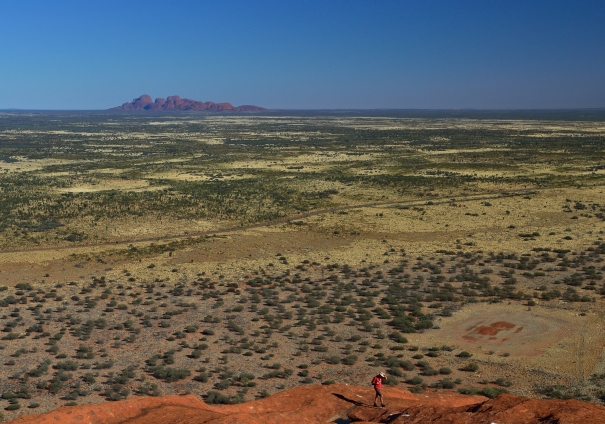