In the 11th century, jewish merchants and bankers from Italy and France migrated to the city of Speyer on the River Rhine. Under the protection of the bishop, they established a community that thrived for 400 years. Talmudic Scholars from Mainz also arrived and Speyer to became an internationally recognized center of jewish learning by the 13th and 14th centuries.

The largest jewish neighborhood was immediately to the west of the bishop’s palace. There is nothing left of the medieval houses, due to a major file in 1689 which also nearly destroyed the cathedral, but the ruins of the synagogue and mikvah survive. A fine museum has been established at what is called the Judenhof. It contains tombstones from the jewish cemetery and a recovered treasure hoard that had been buried during a period of persecution.

The mikvah is a special point of interest. This ritual bath was use for ceremonial cleansing. The bath itself is located 10 meters below the street level, where “living” groundwater was available. 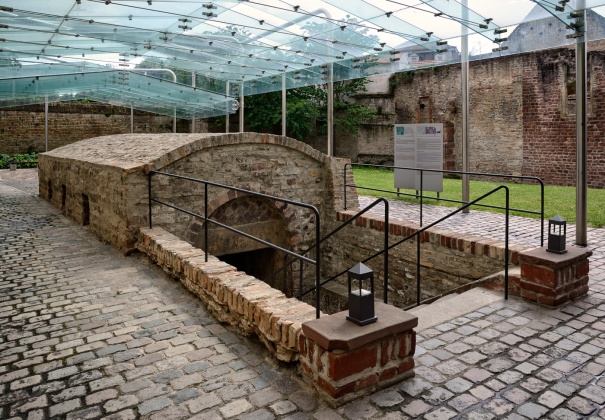 A stairway leads from ground level to a changing room and from there  a semicircular stair leads to the level of the water. Windows above let dim light filter down. There was some debris in the water when I was there. Presumably someone would have been tasked with skimming it off when it was in daily use.

Consecrated in the early 12th century, the synagogue was probably built by some of the same craftsmen who worked on the nearby cathedral. One assumes this was a result of the bishop’s protective oversight. The stonework is rough, more like the earliest, eastern section of the cathedral than like the finely finished stone of the nave. It probably was plastered over in any case. In the image below, the red stone was the original wall while the brick section on the left was an addition built for the use of the women. 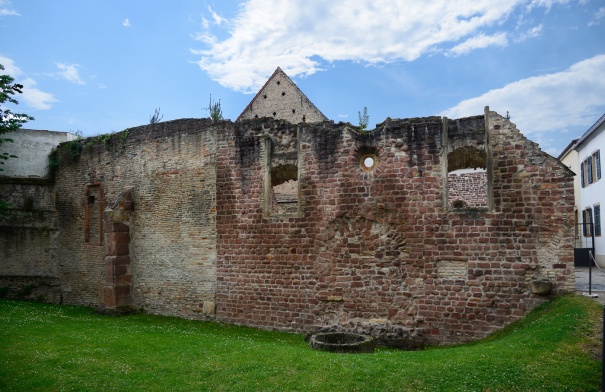 The Jews were driven out of Speyer about A.D. 1500. The synagogue became a storage facility. Today little is left of the interior. The outline of the tabernacle where the Scriptures were stored can be seen in the image below on the wall under the round window. The women’s section on the right was separated from the men’s by a wall. Holes in the wall allowed them to hear the proceedings. 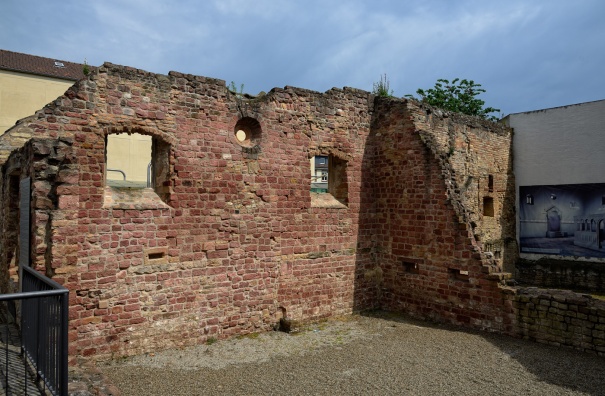 Speyer is only about an hour’s drive from Heidelberg. Though the magnificent cathedral is the main draw, this museum and ruins are definitely worth a visit. interpretive signs are in German, English and French. A selection of brochures are available in other languages as well.